Balanus amphitrite is a small, roughly conical barnacle that reaches a maximum diameter of about 20 mm. It has white walls with vertical bands of purple or red-brown stripes. Both the stripes and the white spaces between them are typically wider at the bottom and narrow toward the top. The walls are often smooth, but sometimes have shallow vertical ridges. Any red- or purple-striped barnacle found in San Francisco Bay is likely to be this species.

Balanus amphitrite is the type of barnacle called an "acorn" rather than a "gooseneck" barnacle. Acorn barnacles have an outer wall made of rigid plates, and attach directly to rock, wood or other substrates without an intervening, fleshy stalk. The animal lives inside these walls and feeds by extending a set of appendages, which it uses as a kind of net to capture food particles, out through an opening at the top. The opening is closed by a lid that opens by flexing out to the sides. This lid, called the operculum, consists of two symmetrical halves, each made of two roughly triangular, rigid plates that interlock along one edge and are attached to an inner membrane. The larger plate at the barnacle's "head" end is called the scutum (plural scuta), and the smaller plate at the hind end is the tergum (plural terga).

Features of the scutum and tergum are often important in distinguishing among similar species of barnacles. To see these features one needs to break open a barnacle, remove and separate the terga and scuta, and clean them of tissue so their outlines and inner surfaces can be examined. Careful scraping is sometimes sufficient for this, but a short soaking in bleach is often helpful. In Balanus amphitrite, the outer surface of the scutum is not marked by either lines or rows of pits running from the base up toward the apex, such as are found in some other Pacific Coast species; a spur protrudes from the base of the tergum that is about 1/3 the width of the base; and on the inner surface of the tergum there is a well-defined set ridges on the outer corner (opposite the edge that interlocks and articulates with the scutum) where a muscle attaches.

Balanus amphitrite is a common fouling barnacle in harbors, and there are many records of this species on the hulls of ships around the world. It occurs on rocks, pilings and seawalls; on the shells of living oysters, mussels and crabs; and in warmer waters, on mangrove roots. Although Balanus amphitrite tolerates water temperatures down to 12°C, it requires temperatures of at least 15-18°C and salinities of at least 10-15 ppt to breed. In Britain and the Netherlands, it lives in waters heated by the outflow from power plants (Vaas 1978).

Balanus trigonus is a primarily subtidal barnacle that ranges from Monterey Bay to Peru, and has been introduced to some other parts of the world. It grows to a maximum diameter of about 15 mm, but is usually smaller. It has white walls with reddish mottling that can resemble stripes. Unlike Balanus amphitrite, however, its walls have strong vertical ridges, and the outer surface of the scutum has one or more rows of pits running from the base toward the apex.

Megabalanus californicus is a primarily subtidal barnacle that ranges from Humboldt Bay to Mexico, but is uncommon north of Monterey Bay. It grows much larger than Balanus amphitrite (to 60 mm diameter). It has white walls that often have vertical red stripes, and are sometimes vertically ridged. The muscle attachment site on the outer corner of the inner surface of the tergum is marked by fainter and less distinct ridges than in Balanus amphitrite.

Paraconcavus pacificus is a primarily subtidal barnacle that ranges from Monterey Bay to Baja California. It usually lives attached to other organisms, such as sand dollars, on sandy bottoms. It grows to a diameter of 35 mm, and has smooth white walls with reddish stripes. There are fine lines running from the base up toward the apex on the outer surface of the scutum, which distinguishes this species from Balanus amphitrite.

Probably from the Indian Ocean to the southwestern Pacific, where it is considered to be native based on the presence of Pleistocene fossils; however, it has been reported as an exotic species in New Zealand and Australia (Foster 1978). Plio-Pleistocene fossils have also been reported from Argentina, though it is not considered native there (Oresanz et al. 2002, p. 121).

In San Francisco, Bay Balanus amphitrite has been reported primarily from shallow lagoon or backwater areas which may have generally warmer waters. These include Aquatic Park and Bay View Park in San Francisco, Coyote Point, and the Palo Alto Yacht Harbor (collected in the 1950s; the Yacht Harbor no longer exists) on the west side of the Bay; Aquatic Park in Berkeley, Lake Merritt (at 21-22°C) and the Oakland Estuary (at 17-19°C) on the east side of the Bay; and at Alviso (in a pond at 22°C and 52 ppt salinity) at the south end of the Bay.

Balanus amphitrite was first collected on the Pacific Coast in Los Angeles Harbor in 1914. It most likely arrived attached to the hull of a ship, as it is one of the most frequently reported species in hull fouling. For example, in the 1920s it was found on over 20% of the ship hulls examined (WHOI 1952), and the first record for this species in San Francisco Bay was also from a vessel hull. Its spread to San Diego Bay by 1927 and to San Francisco Bay by 1938-39 was most likely via ships or boats from Los Angeles Harbor, though these introductions could also have occurred independently on the hulls of ships arriving from overseas. It is possible but not very likely that the initial introductions to these port sites resulted from larvae transported in ballast water, given the relatively early records at these sites. Spread to bays without cargo parts was probably through hull fouling or through larvae carried in currents along the coast. Introduction to the inland Salton Sea in the 1940s probably resulted from barnacles attached to navy planes, boats, buoys or other equipment transferred from San Diego Bay for training purposes (Carlton 1979).

Balanus amphitrite has been introduced to tropical to warm-temperate waters in many parts of the world, primarily as hull fouling although possibly also transported with oyster shipments or in ballast water. A early as 1854, Darwin noted that Balanus amphitrite and a few other barnacles "which seem to range over nearly the whole world (excepting the colder seas)" could have been transported to parts of their range as fouling on ships.

Darwin, C. 1854. A Monograph on the Sub-Class Cirripedia, with Figures of all the Species: the Balanidae, (or Sessile Cirripedes); the Verrucidae, Etc., Etc., Etc. The Ray Society, London. 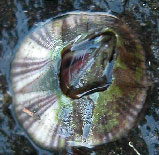 A Balanus amphitrite from San Francisco Bay, showing the bands of purple stripes that distinguish this barnacle from other species in the bay. The moveable lid, within the diamond-shaped opening, separates along a line that runs from lower left to upper right in the image. The head end of the animal is toward the lower left. 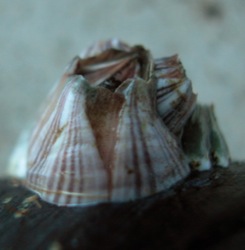 A side view of another Balanus amphitrite from San Francisco Bay, with a juvenile growing on it on the right. 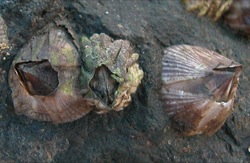 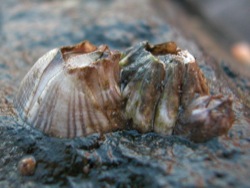 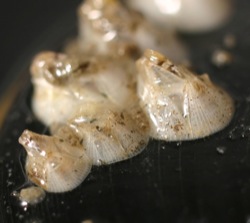