Mya arenaria has a chalky white, oval shell which is rounded at the head end and slightly pointed at the hind end. It can reach up to 15 cm in length. Young clams have a thin gray, yellow or brown tissue covering the shell, which is worn away in older clams except around the shell margins. In some areas the shells are reported to be blue-white or brownish-white rather than chalky white, and the mud the clam lives in can stain the shell rusty or black. The shell surface is roughly sculpted along uneven, concentric growth lines, and the umbo—the hump at the center of growth—is located at the middle of the hinged edge of the shell. When closed, the shells gape slightly at both the head and hind ends.

The two halves of a clam shell are called valves, and in Mya arenaria the two valves are conspicuously different. On the interior of the left valve at the hinge there is a large, shelf-like, scooped-out projection, while the right valve has a pit or depression in the corresponding position on the inside of the valve. This projecting shelf distinguishes Mya arenaria from all other Pacific Coast clams except a few closely related ones discussed below.

Water passes in and out of a clam through two tubes, called siphons, that protrude from the hind end of the shell. In Mya arenaria these siphons are tan or brown and are fused together into a single, thick "neck" that is oval in cross-section. When withdrawn into the shell the siphons sit in a kind of pouch formed by an infolding of the clam's outermost tissue. A curving line on the interior of the shell, called the pallial line, shows where this tissue attached to the shell; an indentation in the pallial line, which reaches to the middle of the shell in Mya arenaria, traces the outline of the pouch.

Mya arenaria lives buried up to 30 cm below the surface in sand, mud and clays, often in mixtures with coarse gravel, When disturbed, it quickly withdraws its siphon into its burrow, emitting a jet of water. It is mainly found in the upper intertidal zone in bays and estuaries, but also occurs in the low intertidal and shallow subtidal zones, and on occasion is reported from deeper water. Adults can tolerate salinities down to 5 ppt, and temperatures from -2° to 28° C and can survive in an oxygen-free environment for up to 8 days.

Mya arenaria spawns once or twice a year in the spring or summer, at temperatures of 10-15° C. A female may release up to a million or more planktonic eggs in a single spawning. After about 12 hours, the eggs hatch out larvae that typically spend 2-3 weeks, rarely up to 6 weeks, drifting in the plankton before settling to the bottom as tiny clams about 0.2 mm long. The newly settled clams then spend 2-5 weeks crawling and floating about, and sometimes attaching to stones or other objects, before burrowing into the sediment. Young clams can burrow back in if disturbed, but older clams, whose foot is much smaller relative to the size of the clam, cannot. Mya arenaria reaches maturity at 1-4 years and a length of 2-5 cm. It normally lives up to 10-12 years, with the maximum reported lifespan being 28 years.

Mya arenaria feeds on microscopic plankton (flagellates, diatoms and bacteria) and organic detritus that it filters out of the water. A large adult calm can filter over 50 liters of water a day. Mya arenaria's predators include snails, crabs, rays, sharks, flounder, sculpin, ducks, cormorants, gulls, shorebirds, sea otter and raccoons; while jellyfish, comb jellies and fish feed on the larvae. Five species of small commensal crabs native to the Pacific Coast have been found living inside Mya arenaria.

In San Francisco Bay, Mya arenaria has often been found at densities over 100, and sometimes over 1,000, clams per square meter. Several 19th century workers reported that it replaced populations of the native bent-nosed clam (Macoma nasuta) in San Francisco Bay, at least in regularly harvested clam beds.

Three other species in the family Myidae have a projecting shelf at the hinge area on the interior of the left valve.

Platyodon cancellatus ranges from the Queen Charlotte Islands in British Columbia to Baja California, boring into hard clay and soft stone. It grows to 7.5 cm in length, and its surface is sculpted with regular, fine concentric lines rather than the irregular, rough sculpturing of Mya arenaria. It is squared off rather than pointed at the hind end, which is covered with dark tissue. The siphons have two pairs of pointed plates near their tips, which are not present in Mya arenaria.

Cryptomya californica ranges from Alaska to Peru. It has a smooth white shell, reaches 4 cm in length, and has very short siphons. It manages to live up to 50 cm under the sediment surface by sticking its siphons into the burrows of mud or ghost shrimp or the innkeeper worm, Urechis caupo. There is a very shallow indentation in the hind part of the pallial line, while in Mya arenaria the indentation is deep, reaching to the middle of the shell.

Mya truncata is found in Puget Sound and northward, and also on the east coast of North America from the Arctic to Cape Cod in Massachusetts. It grows to 7.5 cm in length and, like Platyodon cancellatus, is squared off rather than pointed at the hind end. Its shell is covered with a brown, papery tissue that often extends beyond the shell.

In eastern North America from Labrador to Cape Hatteras in North Carolina, in Alaska north of the Aleutian Peninsula, and in Korea, the Kurile Islands & northern Japan. On the North American Pacific coast, it has been found in Miocene and Pliocene deposits, but not in Pleistocene deposits or in aboriginal shell middens south of the Bering Sea, nor was it reported by any of the numerous collectors on the coast prior to 1874. Apparently it was extinct on this coast south of the Bering Sea by the Pleistocene.

Introduction and Distribution on the Pacific Coast
[with dates of first record]:

Mya arenaria was first collected on the Pacific Coast in San Francisco Bay in 1874, having been accidentally introduced in shipments of Atlantic oysters (Crassostrea virginica) that began in 1869. By the 1880s it was the most common clam sold in San Francisco Bay area markets (Stearns 1881), replacing the native rock cockle (Protothaca staminea) and bent-nosed clam (Macoma nasuta) in the marketplace, and by 1919 it was the only local clam sold. Public and private clam beds ranging in size from a few acres to hundreds of acres were established from Martinez and the Napa River to the South Bay, and fenced to keep out predatory bat rays and flounder. Mya arenaria was also transplanted to other Pacific Coast sites, undoubtedly with many unreported plantings. For example, Stearns (1881) asserted that "it would be a wise, public spirited act if the captains of our coasting vessels would take the trouble and incur the slight expense attending the planting of this clam at such points as their vessels touch at in the ordinary course of business." Spread to some sites may also have occurred accidentally through transplantings of oysters along the coast or with fresh introductions of oysters from the Atlantic. It is possible though less likely that Mya arenaria's appearance in some locations resulted from deliberate introductions from the Atlantic, as some authors have claimed was attempted or occurred, or from the transport of small clams in ship fouling.

In Puget Sound, Mya arenaria has been collected at numerous sites from near the Canadian border to the southernmost end of the South Sound, and in the San Juan Islands [reported in 1910]. The commercial harvest was about 180 tons in Washington in 1985 and over 30 tons in Oregon in 1980.

The commercial harvest in San Francisco Bay declined from 500-900 tons per year in 1889-1899, to generally above 100 tons per year in 1916-1926, to nothing after 1948, possibly due to over-harvesting, habitat loss, pollution or a decline in the market due to an increasing harvest of the Manila clam (Venerupis philippinarum). In recent decades, Mya arenaria has been found throughout San Francisco Bay from as far upstream as Collinsville and Sherman Lake to the south end of the South Bay, and as near to the mouth of the Bay as Pier 39 and Sausalito . There is a small amount of sport harvesting for food and bait.

In addition to the sites listed above, there are several locations where Mya arenaria failed to establish. Mya arenaria reported in Elkhorn Slough by 1916 are apparently no longer present (Wasson et al. 2001), and a bed reported in the Russian River had disappeared by 1920.Mya arenaria from San Francisco Bay were planted in Santa Cruz prior to 1881 and in Morro Bay in 1915, but did not become established in either site. 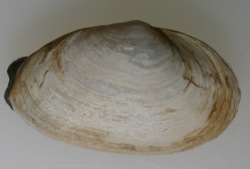 Mya arenaria from San Francisco Bay. The head end is to the right, with the dark siphons protruding slightly from the hind end of the shell at the left. 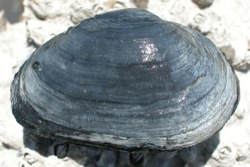 Mya arenaria from San Francisco Bay, with its shell stained dark from the anoxic mud it was living in. The head end is to the right. 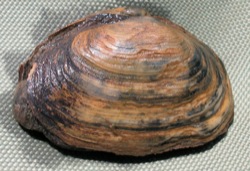 Mya arenaria from San Francisco Bay, with its shell stained rusty from the mud. The head end is to the left, and the siphons protrude slightly at the right.

Left valves of Mya arenaria shells collected from San Francisco Bay shores. The head ends of the shells are to the left. The largest is about 10 cm long.

The largest of the valves from the previous image, showing the shelf-like projection and the shell interior. The shell is about 10 cm long, and the head end is to the left.

Closeup of the shelf-like projection. 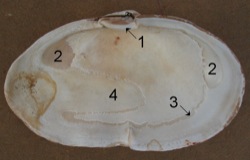 Interior view of the same valve, with the head end to the right, showing the shelf-like projection (1), muscle scars (2), the pallial line (3) and the deep indentation in the pallial line (4) that outlines the pouch that held the retracted siphons.

A young Mya arenaria from San Francisco Bay, with siphons protruding from the hind end. 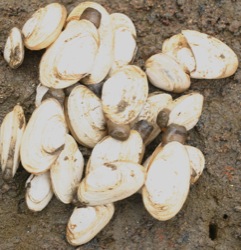 23 Mya arenaria that were dug from a shallow, one-foot-square pit (along with 37 other clams) on the east shore of San Francisco Bay. 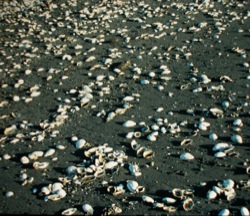 Mya arenaria shells washed up on a beach at Point Pinole, in the northern part of San Francisco Bay.