Corbula amurensis is a tan, white or yellow clam, up to about 25 mm long. It lives partly buried in the sediment, with its hind third or half exposed above the surface. This is often colonized by small organisms and stained brown, in contrast to the clean, buried portion of the clam. The umbo—the hump at the center of growth—is at the hinge or upper margin of the shell and evenly centered between the front and hind ends, giving the shell the overall shape of a broad isosceles triangle. In younger clams the shell surface is covered by a thin, smooth tissue, but in older clams the tissue becomes wrinkled around the lower margin. The right half of the shell is a bit larger than the left and slightly "overbites" it at the lower margin, which distinguishes Corbula amurensis from similar-looking clams on the Pacific Coast.

Water passes in and out of a clam through two tubes, called siphons, that protrude from the hind end of the shell. Corbula amurensis' siphons are brown and short. Water is taken in through one siphon, passes over gills that extract oxygen and food particles, and is expelled through the other siphon. When the siphons are withdrawn into the shell they sit in a kind of pouch formed by an infolding of the clam's outermost tissue. A curving line on the inner surface of the shell, called the pallial line, shows where this tissue was attached to the shell; an indentation in the pallial line, which in Corbula amurensis is very small, traces the outline of the pouch.

Corbula amurensis is primarily subtidal, but is occasionally abundant on intertidal mudflats. It has been collected at sites in San Francisco Bay with salinities of 1-33 parts per thousand, though long-term survival is greatest above 5 parts per thousand. Spawning and fertilization require 5-25 and are most successful at 10-15 parts per thousand. In San Francisco Bay, Corbula amurensis has been collected at temperatures ranging from 8° C on subtidal bottoms in the winter to 23° C on intertidal flats in the summer, which is within the 0-28° C temperature range suggested by its latitudinal range in Asia.

Corbula amurensis reaches maturity at a few months of age. A single female can produce from 45,000 to 220,000 eggs, and there is some spawning year-round. In laboratory studies, the larvae spent 17-19 days in the plankton,

Corbula amurensis was discovered in Suisun Bay, in the northern part of San Francisco Bay, soon after a major flood in the spring of 1986, and its increase and spread coincided with a multi-year dry period that began in mid-1986. The 1986 flood had wiped out the benthic community in the Suisun Bay area, which may have facilitated Corbula amurensis' establishment. That community—dominated by the Atlantic soft-shell clam Mya arenaria, the Atlantic amphipod Ampelisca abdita, the Atlantic polychaete worm Streblospio benedicti, and Monocorophium acherusicum, an exotic amphipod whose origin is unknown—did not return. These organisms were presumably excluded by Corbula amurensis' consumption of their food or larvae.

Werner and Hollibaugh (1993) found that Corbula amurensis filters bacterioplankton less efficiently than it does phytoplankton, but assimilates both well. They calculated that at typical densities in the northern Bay of over 2,000 clams per square meter, Corbula amurensis is capable of filtering the entire water column over the channels more than once per day and over the shallows almost 13 times per day. This filtration rate exceeds the phytoplankton's specific growth rate and approaches or exceeds the bacterioplankton's growth rate, and thus could permanently depress the primary productivity and biomass of these organisms. Phytoplankton blooms which had occurred annually in the northern bay in earlier years essentially disappeared after Corbula amurensis became established.

Kimmerer et al. (1994) found that a decline in the three dominant copepod taxa in the northern bay—Eurytemora affinis, Sinocalanus doerrii and Acartia spp.—that coincided with the spread of Corbula amurensis resulted from its consumption of copepod larvae rather than from food limitation due to the decline in phytoplankton.

Organisms that have used Corbula amurensis as a substrate in San Francisco Bay include diatoms, the Atlantic barnacle Balanus improvisus, and the Atlantic sea squirt Molgula manhattensis.

Southern Siberia south of about 53° N latitude, Japan, Korea and China to about 22° N latitude.

The first record of Corbula amurensis in North America was three specimens dredged from the bottom of Suisun Bay by a community college biology class in October 1986. By the summer of 1987, Corbula had become the most abundant benthic organism in the northern part of the Bay, carpeting the bottom at densities of over 16,000 juvenile clams (with an average length of about 2 mm) per square meter (Carlton et al. 1990; Nichols et al. 1990). It seems likely that Corbula amurensis arrived in the bay very shortly before its discovery, because it was not collected earlier despite regular sampling, and because all the clams collected through March 1987 were less than 11 mm long, and therefore probably less than a year old (Carlton et al. 1990).

By 1990 Corbula amurensis was very common from San Pablo Bay through Suisun Bay, and most abundant in the Suisun Marsh region with mean concentrations of up to 19,000 clams per square meter, and peak densities up to 48,000 clams per square meter. It was soon abundant in the South and Central bays as well, and was occasionally collected in the western Delta as far upstream as Rio Vista. At many sites in the bay, it constitutes more than 95% of the benthic biomass.

Kimmerer, W.J., E. Gartside and J.J. Orsi. 1994. Predation by an introduced clam as the likely cause of substantial declines in zooplankton of San Francisco Bay. Marine Ecology Progress Series 113: 81-93.

Werner, I. and J.T. Hollibaugh. 1993. Potamocorbula amurensis: comparison of clearance rates and asimilation efficiences for phytoplankton and bacterioplankton. Limnology and Oceanography 38(5): 949-964. 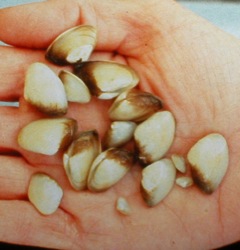 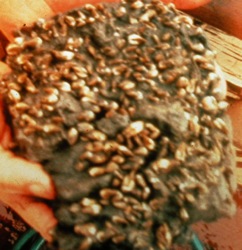 A block of mud containing Corbula amurensis from the bottom of San Francisco Bay. 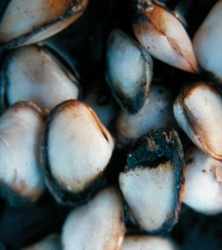 Corbula amurensis from San Francisco Bay. Note the dark fouling on the upper one-third or so of the shell that had protruded from the mud. 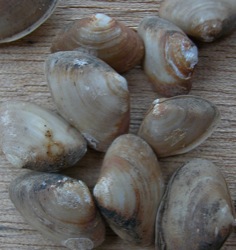 Dried shells of Corbula amurensis from San Francisco Bay. Note the “overbite” of the larger valve that shows clearly in the clam at the center right. 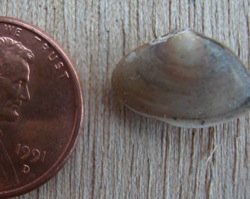 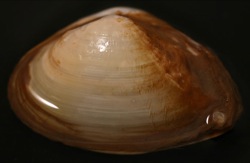 Corbula amurensis from San Francisco Bay. with a young barnacle (Balanus improvisus) attached to the hind part of the shell (lower right part of image).