Watersipora subtorquata is a type of colonial animal called a bryozoan. It grows on a variety of hard substrates including rocks, shells, docks, vessel hulls, pilings, debris, kelp holdfasts, and other bryozoans. On flat surfaces the smaller colonies, up to several centimeters in diameter, are flat and roughly circular. As a colony grows larger it becomes more lobed and may overgrow itself in places. In protected waters where growing conditions are good, colonies may become quite large and grow outward from the substrate (which is often the side of a dock) in lobes and frills, forming a striking, cauliflower-like mass up to 25 cm in height. It is typically a bright orange or red, with varying (sometimes large) amounts of black, as described below.

Most of the following details can be seen only with a hand lens or microscope. The individuals within a bryozoan colony are called zooids. A zooid's soft tissues are called the polypide, which lies on its back in a rigid rectangular or coffin-shaped box, called the zooecium (Greek for "animal house"). In Watersipora subtorquata each zooecium is 0.3-0.7 mm wide and 0.75-1.5 mm long, and they are packed side-by-side and end-to-end in the colony, radiating outward from the initial "founding" zooid. The "foot" end of a zooecium generally points toward the center of the colony, and the head end toward the colony's outer edge.

Watersipora subtorquata feeds with a crown of 19-24 orange, translucent tentacles, called a lophophore, that surrounds the mouth on the head end of the polypide. The tentacles have rows of cilia arrayed along their inner faces and sides. To feed, the lophophore and upper end of the polypide are pushed out of the zooecium through an opening called the aperture, which is on the zooecium's upper surface at its head end. The tentacles are held stiffly to form a sort of cone-shaped funnel, with the zooid's mouth at the bottom of the funnel. Currents produced by the beating cilia carry food particles (primarily microscopic plankton) down along the tentacles to the mouth. When the tentacles are withdrawn into the zooecium, the aperture is closed by a pivoting lid called an operculum.

The colony is usually a bright to dull orange or red. The opercula are black or dark brown, and the lines marking the boundaries between zooecia are usually black. The central and older parts of older colonies are often black; in some cases, virtually the entire colony is black, with only the outermost growing edge showing orange or red. Dead and dried colonies are a uniform dark brownish-purple or black.

The aperture and operculum of Watersipora subtorquata have an "inverted pear" or "mushroom" shaped outline, that is, an upper circular area with a broad, rounded extension at the bottom. The lower edge of the aperture around this extension is sometimes raised in a rim or spout. The dark brown or black operculum usually has two thinner round areas at the sides, like small, translucent "windows." The upper surface of the zooecium is curved and evenly covered by many small pores. Watersipora subtorquata has no spines, no avicularia (structures with a jaw-like element that opens and closes) and no ovicells (specialized structures for brooding embryos)—elements that are conspicuous features in many bryozoans.

Watersipora subtorquata has crimson larvae that it broods inside its zooecia. When released into the water, a larva has neither a mouth nor a digestive tract and is incapable of feeding. It settles quickly to the bottom (usually within a few hours, and always within a day or so), attaches to a hard surface and metamorphoses into a zooid. It then buds off other zooids, which in turn bud off others, forming a colony.

Watersipora subtorquata has often been reported from vessel hulls. It is less sensitive to copper than many fouling organisms, and is therefore less affected by a class of anti-fouling paints. Once it colonizes a hull, it then provides a surface on which other, less copper-tolerant species can settle. Mawatari (1952) reported that in Japan it is a nuisance fouler of both vessel hulls and oyster culturing operations.

Despite a century and a half of scientific debate, there is still a great deal of uncertainty about the taxonomy of the species in the genus Watersipora, which Gordon (1989) described as a "can of worms." As a result, the global distribution, the dates of first record, and even the proper scientific name for the species we are here calling Watersipora subtorquata remain in considerable doubt. In part this is due to confusion with Watersipora arcuata, which is now recognized as a distinct species with a clearly different aperture shape. However, it is also not clear how many Watersipora species there are with an aperture that is similar in shape to Watersipora subtorquata's.

Watersipora subtorquata was not found in surveys in Coos Bay in 1997-1999. It was first recorded there in the Charleston boat basin in 1990, was common to abundant in 1991-1992, and has since been rare or absent from collections. It was first collected in Humboldt Bay in 2000-2001, where its absence from previous surveys suggests that it arrived very recently. It is abundant in marinas where its thick, encrusting colonies are known as "Humboldt Bay coral" (Boyd et al. 2002). Its first documented collection in San Francisco Bay was in 1992, but it was apparently observed and misidentified for some years prior to that. It occurs in flat, more-or-less circular colonies on docks and rocks from Richmond to San Leandro on the eastern shore, and from the Tiburon Peninsula to the San Mateo Bridge on the western shore; and in foliose encrustations up to 15 cm thick on docks near the mouth of the bay. The earliest collection in central California was at Drakes Estero in 1984.

It was first collected in southern California at Rincon Beach in Ventura County in 1963. It's possible that it was present in many more sites in the 1960s and 1970s than appear in the above list, but confused with Watersipora arcuata, which was first collected in southern California at about the same time but was apparently much more common than Watersipora subtorquata until at least the late 1960s.

Because its larvae spend less than a day in the plankton before settling, Watersipora subtorquata could not have been transported long distances as larvae in currents or in ballast water. While long-distance transport as adults on bits of seaweed or debris in currents or ballast tanks is theoretically possible, it seems unlikely. Instead, Watersipora subtorquata probably reached the west coast of North America as fouling on ship hulls. It is common in fouling and has often been found on ship bottoms, and is highly tolerant of copper-based anti-fouling compounds. Watersipora subtorquata is also reported to be a hermaphroditic species capable of self-fertilization, which would make it easier for a small population (or even a single colony) that was transported to a distant location to become established.

As noted above, the taxonomy of Watersipora species with an aperture with a convex lower border (that is, with the aperture's lower border curving outward in a rounded extension) remains unclear. Specimens of this type have been reported at many locations on all warm-water ocean coasts, including several 19th century records. It's possible that more than one species is involved, perhaps including one or more species transported in hull fouling to distant parts of the world during or prior to the 19th century. Though we are currently using the name Watersipora subtorquata for the bryozoan of this type that is found in California and Oregon, future research may well assign a different name to this population.

It is less clear which species are present in other areas. There are 19th century records of similar bryozoans in the northern Gulf of California [collected in 1888], western Mexico [reported in 1856], Brazil [reported in 1839], the Mediterranean Sea [reported in 1854 in the Aegean Sea and 1886 in the Adriatic Sea], the Arabian Sea [reported in 1886], Japan [reported in 1890], and northern Australia [reported in 1898], which may represent either native species or early introductions. Pleistocene fossils in southern Baja California (mentioned above) and early records in the northern Gulf of California and western Mexico suggest that there may be a native species, distinct from Watersipora subtorquata, in this region, perhaps including records from Pacific Panama, Columbia and the Galapagos Islands. The Japanese population, however, is probably Watersipora subtorquata, along with specimens from the Atlantic Coast of France [reported in 1984], which are thought to have been introduced from Japan in 1968-1973 with oyster stock (Crassostrea gigas). The population in the Indian River Lagoon in eastern Florida [reported in 1976], said to have been introduced in hull fouling (Carlton & Ruckelshaus 1996), is also probably Watersipora subtorquata. Other populations that may include this species have been reported from the western Atlantic from Bermuda and the Gulf of Mexico to Venezuela, at numerous sites in the Mediterranean, the Azores, the Cape Verde Islands, West Africa, South Africa, the Red Sea and Suez Canal, India and Sri Lanka, Indonesia and Hawaii. 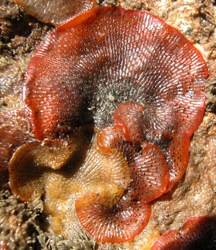 A small, flat Watersipora subtorquata colony encrusting the underside of an intertidal rock in San Francisco Bay. The colony is mainly red, with a blackened central portion and black opercula. The orange bryozoan in the lower left of the image is Schizoporella unicornis. 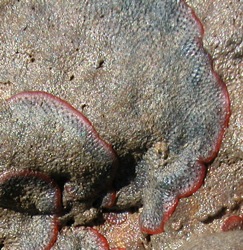 An old Watersipora subtorquata colony on a rock in San Francisco Bay. Most of the colony is black, with only the outer rim colored red. 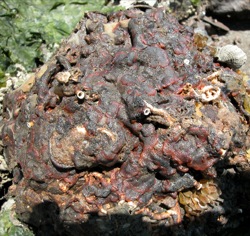 An old Watersipora subtorquata colony covering a rock in San Francisco Bay. The tubes of the polychaete worm Ficopomatus enigmatus, the oyster drill Urosalpinx cinerea, and the egg cases of the drill are all visible in the image. 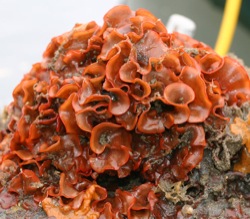 A large, orange Watersipora subtorquata colony from the side of a dock in San Francisco Bay. The colony’s edges have grown up from the substrate in frilly lobes. 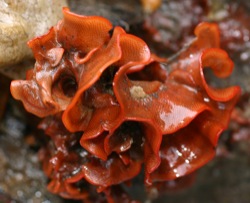 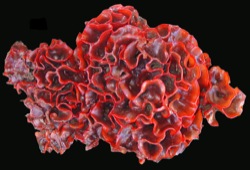 A large red colony of Watersipora subtorquata (about 10 x 15 cm) from the side of a dock in San Francisco Bay. 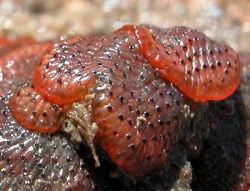 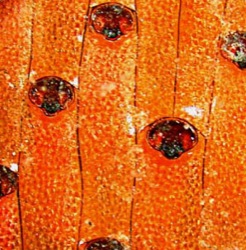 Closeup of Watersipora subtorquata zooecia from San Francisco Bay, showing the black opercula and the fine black lines where the zooecia join. The two round “windows” (thinner, translucent areas) in each operculum are characteristic of this species.