The shell is usually cream or gray, sometimes with green or brown tones, and sometimes stained rusty or black (the latter typical of anoxic mud). It often has patterns of dark brown or black, overlapping, triangular markings that start from points nearer the umbo and widen toward the shell's lower edge. Smaller specimens (up to about 3 cm) found in muddy sand on the east shore of San Francisco Bay come in a remarkable variety of hues, including white, tan, yellow, blue and green, often with darker markings that include the patterns described above, tall black triangles, and intricate patterns of zigzag lines. The interior of the shell is mostly white, often with dark purple or yellow staining near the hind end and the lower margins of the shell.

Water passes in and out of a clam through two tubes, called siphons, that protrude from the hind end of the shell. In Venerupis philippinarum these siphons are fused together along most of their length but are separate at the tips. They are relatively short—earning it the common name of "littleneck clam"—which prevents the clam from burrowing deeply. Venerupis philippinarum occurs in bays and estuaries in the middle to low intertidal zone, in muddy sand, sandy mud and among buried cobbles. I have also frequently found it in the mud inside tires that are hung on the sides of docks as boat bumpers. In its more usual haunts it occurs just beneath the surface of the sediment. It sometimes plows along just under the surface, leaving a grooved track in the sand or mud; often one can find the clam under a slight mound at the end of the track. In San Francisco Bay, larger specimens of Venerupis philippinarum are generally found among buried cobbles, under rocks, or in other protected situations. On the intertidal flats, birds, crabs, snails, bat rays and other predators probably remove these shallowly-buried clams before they can reach large size.

Venerupis philippinarum can tolerate salinities down to 10-15 ppt, but grows best at 24-31 ppt and temperatures of 13-21° C. It reaches maturity at a length of 1-2 cm, and can live up to 7-10 years. It requires temperatures above about 14° C to spawn. Its larvae spend 3-4 weeks drifting in the plankton, then settle to the bottom and attach with threads to rocks or shells.

A variety of organisms have been observed feeding on Venerupis philippinarum on the Pacific coast, including the moon snail Euspira lewisii, the Atlantic oyster drill Urosalpinx cinerea, crabs, bat rays, flounder, sturgeon, willet, gulls, ducks and raccoons, and undoubtedly many others. The small pea crabs Pinnixa faba and Pinnixa littoralis are sometimes found living inside the shells of live Venerupis philippinarum.

On the Pacific Coast, Venerupis philippinarum is most likely to be confused with clams in the genera Protothaca and Chione whose shell surfaces are sculpted by both radiating and concentric ridges. In Chione species, which are mainly found in southern California and Baja California, the outline of the shell is more circular than oval, and in some species the concentric ridges are considerably more pronounced than the radiating ridges. Protothaca laciniata, which ranges from Monterey Bay to Baja California, is also nearly circular in outline, the concentric and radiating ridges are equally pronounced, and there are small spines (which may be missing in worn specimens) at the intersections of these ridges.

Japan, Korea and China, with natural range expanded by cultivation.

The first record of an established population of Venerupis philippinarum in North America is at Ladysmith Harbor on the eastern shore of Vancouver Island, British Columbia in 1936. Drifting larvae appear to be responsible for Venerupis philippinarum's spread northward from Ladysmith Harbor in Georgia Strait and southward on Vancouver Island, and its later spread from Barkley Sound on the west side of Vancouver Island northward to Hecate Strait. However, the clam's spread across Vancouver Island to Barkley Sound and southward to various sites in Washington, Oregon, California and Baja California is probably due primarily to transplanting of oysters or intentional transplants (recorded or unrecorded) of Venerupis philippinarum along the coast, with possibly a few independent introductions in oyster shipments from Japan. Though it was introduced accidentally, it was harvested and sold in markets on the Pacific Coast as early as 1941.

Venerupis philippinarum was reported in oyster beds in Samish Bay, Washington in 1924, and in a shipment of Japanese oysters at Elkhorn Slough, California in 1930, though neither of these records seems to have led directly to established populations. Efforts were made to establish Venerupis philippinarum in Morro Bay, Newport Harbor and the Salton Sea in California 1953, in the Queen Charlotte Islands in British Columbia in 1962, in Yaquina and Tillamook bays in Oregon in 1965, and in Coos Bay in 1987, all of which failed.

Today, Venerupis philippinarum is one of the most common benthic organisms in San Francisco Bay, where it has been found from the uppermost reaches of Suisun Bay near Browns Island to the south end of the South Bay, and nearly to the Golden Gate. It is commonly found at concentrations up to 2,000 clams per square meter from San Pablo Bay to the South Bay. It is collected non-commercially in the bay for both food and bait.

Venerupis philippinarum was repeatedly planted on Oahu, Hawaii by residents from Japan. Populations may have become established as early as the late 1880s, and were clearly established by 1918 when they were collected from the shore and also offered for sale in Honolulu fish markets. In 1937, clams from Oahu were planted on most of the other Hawaiian islands. Venerupis philippinarum was also introduced for farming on the French Atlantic coast [established in the wild since the 1980s] and French Mediterranean coast [planted in the Thau Lagoon at Languedoc in 1980]; and in Italy in the Venice lagoons [planted in 1983] and the Po River delta [planted in 1986]; and is now also present in Romagna and Sardinia in Italy. It has been cultured in England but is not established there. 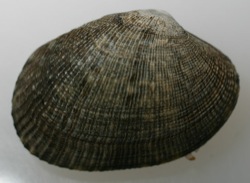 Venerupis philippinarum from San Francisco Bay. The head end is toward the right. Note the oval shape, strong radiating ridges, and umbo angled toward the head end. 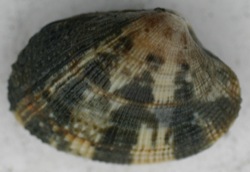 Venerupis philippinarum from San Francisco Bay, showing a common color pattern of dark triangular markings. The head end is toward the right. 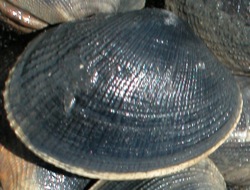 Venerupis philippinarum taken from black, anoxic mud underneath rocks in San Francisco Bay. The head end is toward the right. 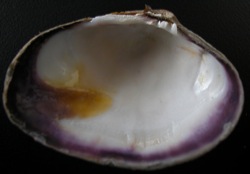 Venerupis philippinarum from San Francisco Bay showing the interior of the shell, with the head end toward the right. The margins and hind end are deep purple. The rounded, yellow-stained indentation extending in from the hind end marks the pouch that holds the retracted siphons when the shell is closed. There are no teeth along the margin of the shell (compare to Protothaca, below).

Venerupis philippinarum showing siphons (at top of image) and foot (at lower left). The head end is toward the bottom of the image. Note that the siphons are fused along most of their length, but separated at the tips. 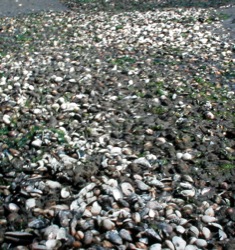 A dense clam bed consisting mainly of Venerupis philippinarum, in a saltmarsh channel on the east shore of San Francisco Bay. 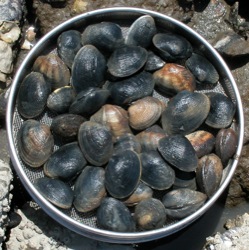 Venerupis philippinarum dug from the black mud and cobbles beneath intertidal rocks in San Francisco Bay.

Venerupis philippinarum from a sand beach on the east shore of San Francisco Bay. 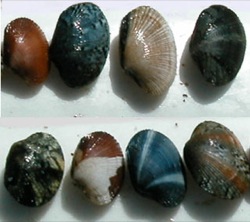 Some of the variation in color in the previous sample. 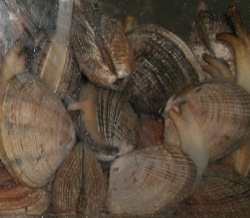 Live, cultured Venerupis philippinarum for sale in a Chinese market in Oakland, California. 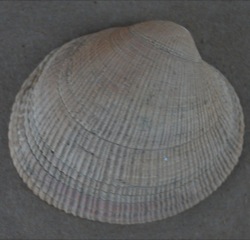 Detail of the interior of the preceding Protothaca staminea shell, showing the teeth on the margin of the shell, which are not present in Venerupis philippinarum. 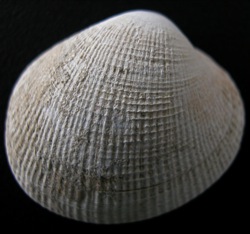 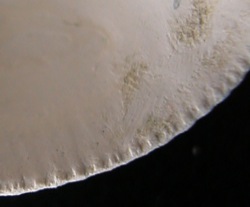 Detail of the interior of the preceding Protothaca laciniata shell, showing the teeth on the margin of the shell.