Myosotella myosotis is a small snail with a smooth, thin shell that is brown, yellow-brown or red-brown, sometimes with a white or light-colored margin around the aperture (the opening through which the snail emerges). The aperture is long and roughly oval in shape, rounded at the bottom but narrowing to a point at the top. There are 2 or 3 conspicuous, oblique ridges or folds on the lower part of the inner wall of the aperture. There is no operculum (a rigid plate possessed by most marine snails, which closes off the aperture when the snail withdraws into the shell). Myosotella myosotis grows to a maximum length of 8 mm.

Myosotella myosotis is typically found under boards and other debris and on plant stems in the highest parts of the salt marsh. In San Francisco Bay, it has been collected at water salinities of 10-31 parts per thousand, and water temperatures of 16-24° C. It breathes air through a lung, in common with terrestrial snails, to which it is related. It feeds by scraping minute plant particles from the surfaces it crawls over. It is eaten by willets (Catoptrophorus semipalmatus) and probably other birds.

Berman and Carlton (1991) found that its diet was similar to that of the native saltmarsh snails Assiminea californica and Littorina subrotundata in Coos Bay, Oregon. They did not, however, find evidence that Myosotella myosotis is competitively superior, and concluded that its establishment was not accomplished at the expense of the native snails.

Assiminea californica is a native snail found from Vancouver Island southward in the same high saltmarsh habitat as Myosotella myosotis.It is smaller (reaching a maximum length of 2 mm), rounder and darker brown,has an operculum, and breathes through gills.

Europe, from Great Britain and the western Baltic Sea to the Mediterranean and Black seas.

In Puget Sound, Myosotella myosotis is found in the San Juan Islands and from Birch Bay to the Kitsap Peninsula and Hood Canal. It is common and abundant in the salt marshes around Humboldt Bay. In San Francisco Bay, it is found from Napa River in the north to Alviso at the south end of the bay.

The first record of Myosotella myosotis on the Pacific Coast is from San Francisco Bay in 1871, followed by Humboldt Bay in 1876. It probably arrived on the Pacific Coast in transcontinental shipments of Atlantic oysters (Crassostrea virginica), which started in 1869, though possibly it might have come in solid ballast or, less likely, in hull fouling. Its appearance in other Pacific Coast sites could have derived in some cases from transplants of oysters along the coast, or from transport in solid ballast or hull fouling on coastal vessels, or possibly from separate introductions from the Atlantic. Since Myosotella myosotis does not have planktonic larvae, it is unlikely to have been transported in ships' ballast water.

Eastern North America [reported at Boston in 1841] from Nova Scotia to Florida and Bermuda [collected in 1855]. New Zealand [since the 19th century], Australia and South Africa have also been reported as part of Myosotella myosotis' global distribution. Some empty Myosotella myosotis shells were collected in Uruguay, but it's uncertain if these represent an established population.

Myosotella myosotis was probably introduced in solid ballast to eastern North America, and spread along the coast in oyster transplants, solid ballast or fouling. 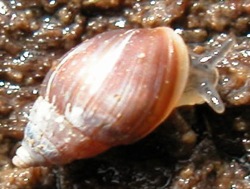 Myosotella myosotis on the underside of a board, in the upper part of a salt marsh in San Francisco Bay. Note the elongate shell and the slightly tilted apex.

Myosotella myosotis below and Assiminea californica, a native snail often found in the same high saltmarsh habitat as Myosotella, above. Note the characteristic differences in the size, shape and color of their shells. 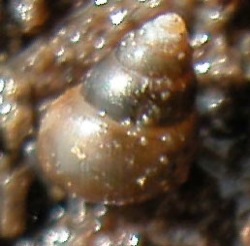 Close up of Assiminea californica. Note the shorter, rounder and darker brown shell.