Littorina saxatilis is a small Atlantic periwinkle that has been found on the Pacific Coast only in San Francisco Bay. Its shell has 4-5 whorls (a whorl is one full spiral turn of the shell) with a conspicuous shoulder where one whorl attaches to the preceding one, and strong spiral ridges on its surface. It grows to a height of 12 mm in San Francisco Bay, and 18 mm in the Atlantic Ocean. In San Francisco Bay the commonest color is yellow, or yellow on the lowest whorl and gray or brown on the upper ones, sometimes with brown or white spots or spiral brown stripes. The interior of the shell and the operculum—the rigid oval plate that closes the aperture when the snail withdraws into its shell—are typically brown. Occasionally, shells from San Francisco Bay may be white or dark blackish brown.

In the North Atlantic, Littorina saxatilis varies greatly in both shell shape and color, and different forms were often given different species or subspecies names in the past (28 species names and 66 subspecific names according to Brown 2004). Much of the shell variation is now thought to be due to growth responses to crab predation (thicker shells and narrower apertures where predation intensity is high) and wave exposure (wider apertures and lower spired forms where wave action is heavy). These differences can manifest over short distances along vertical gradients, though curiously not always in the same direction, e.g. in Britain, thinner-shelled, large-apertured forms occur in the upper tidal zone with thicker-shelled, small-apertured forms in the middle tidal zone, but in northwestern Spain, thick-shelled, small aperture forms occur in the upper tidal zone with larger-apertured froms in the lower tidal zone.

In San Francisco Bay, the shells of Littorina saxatilis are often infested with a marine fungus that is also found on native barnacles and periwinkles. The fungus makes microscopic pits in the shell, filled with black fruiting bodies, which can turn the shell dark when they are abundant. Some shells have bright green alga growing on the spire.

In the Atlantic, Littorina saxatilis lives in a variety of habitats, including the high intertidal and splash zone on moderately-to-highly exposed coasts, where it may be restricted to protected crevices; in the intertidal and shallow subtidal zones in lagoons and estuaries, on the rockweeds Ascophyllum and Fucus; in salt marshes on cordgrass stems; and on firm mud and on beaches on scattered stones, shells and debris. In favorable habitats, population densities can reach as high as thousands or even hundreds of thousands of snails per square meter.

In San Francisco Bay, Littorina saxatilis is found on rocks in the high intertidal zone along with the native barnacle Balanus glandula, typically nestling in rock crevices or empty barnacle shells when the tide is out. Densities of around 2,000 snails per square meter have been observed.

Littorina saxatilis feeds on diatoms, filamentous algae and plant litter, and can survive in salinities down to 5-7 ppt. Unlike many periwinkles, it broods its larvae internally and releases them as tiny snails. It can live for up to 6 years.

Littorina scutulata and Littorina plena are very similar to each other and both are found in San Francisco Bay. They both have shells that are high-spired and conical compared to Littorina saxatilis' more rounded shell. Their shells grow to 18-19 mm high, and are mainly black or have a dotted, banded or checkered pattern on a brown, olive or black background (never yellow), and the operculum and interior of the shell are black. Both species range from Alaska to Baja California. Littorina plena occurs on moderately exposed or sheltered shores and in salt marshes. It often has a pale stripe on the inside of its shell within the aperture, and the tentacles on its head are all black or have a longitudinal black stripe. Littorina scutulata occurs on wave exposed to moderately protected shores. It usually does not have a pale stripe on the inside of its shell, and its tentacles have transverse black bands.

The third native species in the San Francisco Bay area is Littorina keenae, which ranges from Coos Bay, Oregon to Baja California. It is found on bare rock in the high intertidal zone on the open coast and ranges into San Francisco Bay at least as far as the western shore of Yerba Buena Island. It grows up to 23 mm high, its shell is black or brown with irregular white flecks, and it has a conspicuous white stripe on the inside of its shell. The inner edge or lip of the aperture is flat and smooth.

Two northern species are close relatives of Littorina saxatilis (all three are in the subgenus Neritrema), and harder to distinguish from it. Littorina sitkana ranges from Alaska to Cape Arago, Oregon, and is usually found on sheltered rocky shores. It grows up to 21 mm high, and is highly variable in shell shape (from high-spired and thin-shelled to rounder and thicker-shelled), surface texture (from smooth to having strong spiral ridges) and color (usually blackish brown, but sometimes white, yellow, orange or banded). Littorina subrotunda is found from Humboldt Bay northward, in habitats ranging from wave-exposed rocky shores to salt marshes. It grows up to 12 mm high, and is similarly variable in shell shape, surface texture and color (including black, white, orange and banded forms).

Littorina littorea is a European species that was introduced in the 18th or 19th century to eastern North America, where it is now common. It is often found in the algae used to pack shipments of New England bait worms and lobsters, and is also sold as live seafood in Asian food markets. Littorina littorea has been found in San Francisco Bay several times since the 1960s in numbers ranging from single snails to populations of several thousand individuals; in Anaheim Bay in southern California, where the population has been eradicated; and near Vancouver in British Columbia. It grows up to 38 mm high, and has a thick brown, red-brown or blackish shell with fine spiral ridges. Its profile is smoothly conical, with no obvious shoulders where one whorl attaches to the preceding one. The inner edge or lip of the aperture is white, and its tentacles have transverse black bands.

Littorina obtusata is another north Atlantic species that is common in the algae used to pack bait worms. It grows up to 12 mm high, and has a smooth shell and a squatter shape than Littorina saxatilis. It has a very flat spire, with the lowest whorl making up about 90% of the height of the shell. It can be yellow, orange or brown, or rarely green, black or banded.

From boreal/subarctic shores in the North Atlantic, including Hudson Bay, Baffin Island, Greenland and the Barents Sea, south along the America coast to Chesapeake Bay, and along the European coast to the Straits of Gibraltar. Outlying populations in the Azores and Canary Islands, Venice, Tunisia, and three sites in Namibia and South Africa may represent remnants of formerly more widespread populations, or introductions by human activities or migrating birds.

Littorina saxatilis was first collected at Emeryville Marina in San Francisco Bay in 1993, and has since been found at other sites in the bay including the Oakland Estuary, San Leandro Bay, Brisbane Lagoon, Coyote Point Marina and Redwood Creek. At many of these sites it has a very restricted distribution (a few meters to a few tens of meters of shoreline) adjacent to a public boat ramp, a marina, or a popular fishing spot.

Littorina saxatilis' spread from initial sites of introduction is expected to be slow. In the Atlantic it typically takes 2-10 yr to colonize new habitats within a range of 1 km or less, with dispersal mainly occurring on drifting seaweed. Dispersal within and between Pacific Coast bays may be slower, since these lack the abundant cover of Ascophyllum nodosum, with its numerous float bladders, that characterizes many Atlantic shores. While Littorina saxatilis' production of crawl-away young rather than planktonic larvae may limit its opportunities for transport, it should increase its chances of establishment once it is transported to a distant site, since the released snails are likelier to maintain the population density needed for successful reproduction. Its latitude range in the Atlantic suggests that it could become established on the Pacific Coast from Baja California to Alaska (Carlton & Cohen 1998).

As noted above, isolated populations in the Canary Islands, the Azores, Tunisia [reported in 1893] and southern Africa may either be remnants of a formerly more widespread population or may be due to introductions by either human activities or migrating birds. A recent genetic analysis (Panova et al. 2011) suggests that a population found in the lagoons of Venice was introduced from northern Europe in or before the 18th century, possibly in solid ballast carried by ships. The original scientific description of Littorina saxatilis, published in 1792, was based on these Venetian snails. 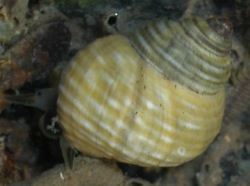 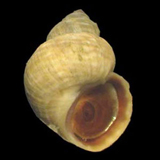 A yellow Littorina saxatilis from San Francisco Bay. Note the obvious shoulders, the brown operculum and the brown interior of the shell. 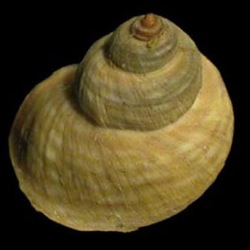 Another view of the same specimen. 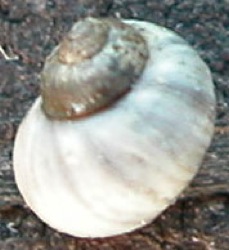 A white specimen of Littorina saxatilis from San Francisco Bay. 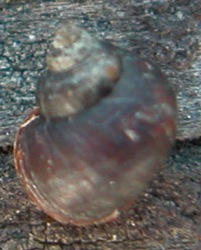 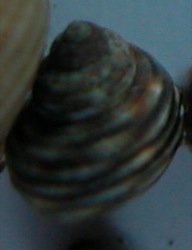