Urosalpinx cinerea has a knobby, rugged shell with usually 5 whorls (a whorl is a complete turn of the spiral shell) with rounded shoulders. There are 9-12 vertical, rounded ribs per whorl, which are crossed with about 15 rows of thinner spiral ridges. The aperture (the opening through which the snail emerges) is oval with a short, open canal at its base. There are 2-6 small teeth inside the aperture on its outer lip. The shells are usually yellow, sometimes with brown streaks, but are occasionally orange (especially small specimens), gray or white; the interior is purple, red-brown or yellow. The operculum (the plate that closes the aperture when the snail withdraws into its shell) is orange or yellow-brown. On the Pacific Coast, Urosalpinx cinerea grows to 30-35 mm in length, with the larger specimens usually being female.

Urosalpinx cinerea occurs in intertidal and shallow subtidal waters in bays and estuaries, to a maximum depth of about 15 m. It is common on rocks and oyster reefs, and can live in salinities down to about 13-15 parts per thousand. Its food includes oysters, barnacles, mussels and sometimes snails. To feed, Urosalpinx cinerea bores a hole through its prey's shell using a file-like rasping organ called a radula, assisted by glandular secretions that soften the shell. It then inserts its proboscis and feeds on the animal's soft tissues.

Urosalpinx cinerea spawns in spring and summer. Each female attaches about 20-40 leathery, vase-shaped egg capsules in a group on a hard surface, such as the underside of a rock. The capsules are translucent and about half a centimeter tall. Each contains about 5-12 yellow eggs, which emerge after 6-8 weeks as tiny snails. The young snails feed on encrusting bryozoans, small barnacles, and other small snails. They mature in 2 years, when females are at least 16 mm long, and may live up to 5-8 years.

A study in the northwestern Atlantic reported that mussels are preferred as prey, while a British study found that oysters and barnacles are preferred to mussels. In intertidal areas in eastern San Francisco Bay, Urosalpinx cinerea's most common prey species appear to be barnacles, especially Balanus glandula, and the Asian clam Corbula amurensis, which lives partially buried in the sediment. Occasionally, Urosalpinx cinerea is found drilling into the hard-shelled Manila clam, Venerupis philippinarum. Urosalpinx cinerea can be a major predator on oysters, especially oyster spat, on both shores of the North Atlantic. In England, for example, it feeds on native oysters (Ostrea edulis), with each snail estimated to consume about 40 spat per year. Control efforts there have included tile traps and bounties (Eno et al. 1997). On the Pacific Coast, however, Urosalpinx cinerea has been less of a problem than introduced Japanese drills.

Northwestern Atlantic from the Gulf of St. Lawrence to southeastern Florida.

Urosalpinx cinerea was first found on the Pacific coast in 1890 in south San Francisco Bay oyster beds. It had apparently been introduced with shipments of the Atlantic oyster, Crassostrea virginica (Stearns 1894), which began in 1869. Since Urosalpinx 's larvae are non-planktonic, its arrival in additional Pacific Coast sites was probably accomplished either through further oyster shipments from the Atlantic or in transfers of oysters or other shellfish from other Pacific Coast bays. Atlantic oysters were planted in Ladysmith Harbor before 1911, Boundary Bay starting in 1906, Puget Sound from 1899 to the 1920s, Willapa Bay in 1874 and from 1894 to the 1920s, Humboldt Bay from 1896 to the 1930s, Tomales Bay starting in 1875, Elkhorn Slough in 1923 and 1932, and Newport Bay in the 1930s, all before Urosalpinx cinerea was collected at these sites. Transfers of either Atlantic or Japanese oysters (Crassostrea gigas), or clams or mussels from Pacific Coast bays where Urosalpinx cinerea had become established to sites where it had not could also have contributed to its spread.

England [collected on oyster beds in 1927]

Urosalpinx cinerea was initially collected in England on oyster beds in Essex, having been accidentally introduced with shipments of oysters (Crassostrea virginica) from the U.S. Atlantic Coast, and has been spread on the English coast by transfers of oysters. 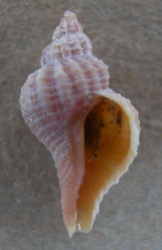 Urosalpinx cinerea shell from San Francisco Bay. Note the rounded vertical ribs crossed by thinner spiral ridges, and the open canal at the base of the aperture. 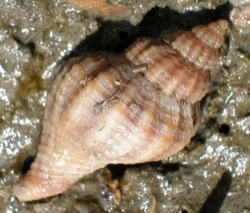 A live specimen of Urosalpinx cinerea in San Francisco Bay. 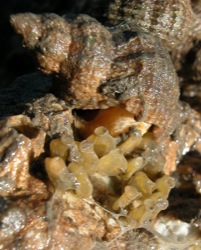 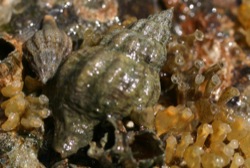 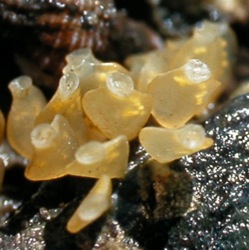 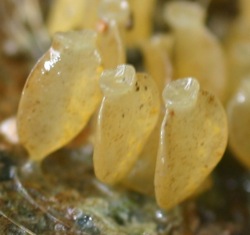 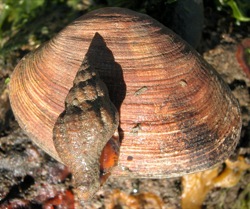 A clam (Venerupis philippinarum) with a hole bored part way through its shell by Urosalpinx cinerea. The snail has pulled its foot into its shell and nearly closed its aperture with an orange operculum. The hole near the rim of the clam’s shell, just to the right of the snail. 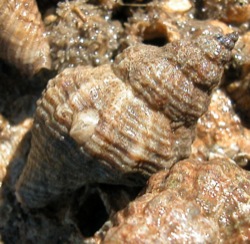 Urosalpinx cinerea with a small barnacle (Balanus sp.) growing on it. 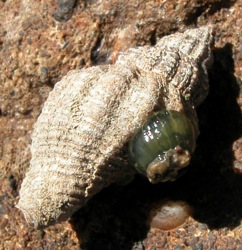 Urosalpinx cinerea with an anemone (Diadumene lineata) growing on it. 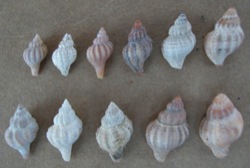